Amazon suspends workers who refuse to work in smoke 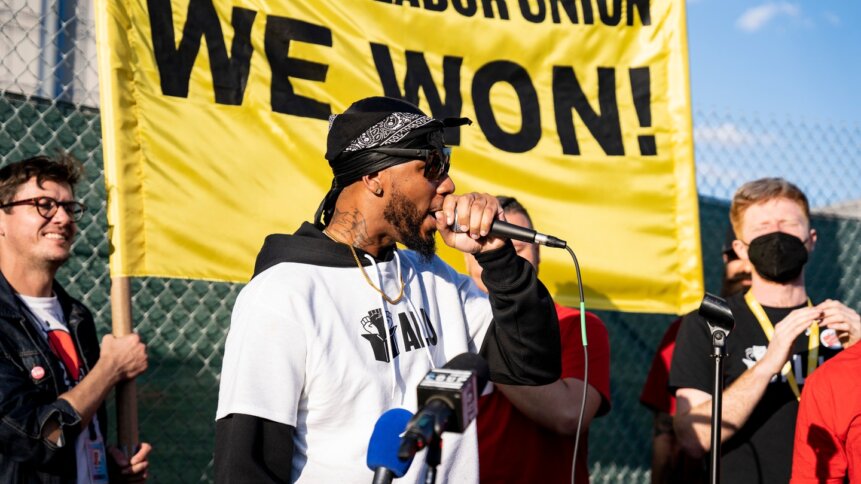 The Amazon Labor Union after their first success in Staten Island.

Amazon is currently a company that appears undecided about which side of the hero/villain ledger it wants to appear on. On the one hand, it is making billion dollar moves to electrify its last-mile delivery fleet, to help the planet breathe easier. And on the other, as an adjunct to its continuing fight against unionization and giving its workforce a voice in their pay and living conditions, it appears to have ordered workers to work in a fire-damaged warehouse choked with smoke. And then suspended them when they refused. 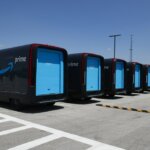 What makes that slightly more connected than it would otherwise appear is that the warehouse in question is at what is currently Amazon’s only successfully unionized facility, JFK8 in Staten Island.

Connor Spence, Secretary Treasurer for the Amazon Labor Union, explained that when a fire broke out at the warehouse, the whole building was evacuated, and all the day shift workers were sent home while the fire was dealt with. Workers who came in for the night shift were at first not told what was going on, and were then told to carry on with their work in the fire-damaged building.

Except, as Spence told CNN, the building still reeked of smoke, making it difficult to breathe at some workstations. The union pushed for around 50 staff to be sent home with full pay, rather than be forced to continue to work in unsafe conditions. 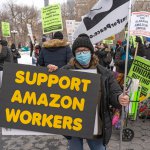 An Amazon spokesperson confirmed there had been a fire, but added that the FDNY had certified the building safe, leading to the request for the night shift to report for duty as usual. Amazon’s take on what happened next is that most people reported to their workstations as requested, but that “a small group refused to return to work and remained in the building without permission.”

Then, 50 of the workers were summarily suspended – with pay. The suspension is expected to stay in place while Amazon conducts an investigation into what happened at JFK8. No-one knows how long that will take, but it’s important to remember that it is mid-October in New York, with Christmas less than 11 weeks away and the cost of living struggling to remain affordable. Any additional shifts ahead of the holidays look likely now to be denied the suspended workers.

It’s also worth remembering that Amazon is still fighting the validity of the Amazon Labor Union’s existence, and has yet to negotiate with it at all, despite the fact that its initial appeal against the creation of the union failed in a categorical and laughable way. So, rather than negotiate with the ALU to send people home with pay for the safety of its workforce, Amazon management in Staten Island chose to suspend workers on pay, rather than dignify the union with recognition of its existence, as that could be used in future cases to establish the union’s right to negotiate on behalf of the workers at JFK8.

Having successfully – at least for now – established its first union chapter at JFK, the Amazon Labor Union narrowly failed to establish a second chapter at the much smaller sorting facility known as LDJ5. 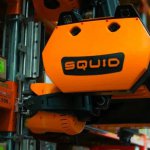 The union is on the brink of discovering whether its third attempt to get a chapter up and running will be successful or not. Workers at an Amazon facility in Albany, New York, known as ALB1, are voting this week on whether to set up their own chapter of the Amazon Labor Union, with the votes to be counted and announced on October 18th.

The initial choice facing the Albany workers would seem to be whether they believe Amazon management in Staten Island are going hard for the Ebenezer Scrooge Award, 2022, by initially demanding staff go to work in smoke-reeking, if structurally safe, conditions, or whether they believe Amazon management that the issues at JFK8 were the result of a handful of upstarts who want to make the company look bad, and so had to be suspended on pay to avoid service interruptions two months before the holidays. Of course, they also need to factor in their own experiences in their Albany facility and how they themselves feel about their pay, their conditions, and their relationship with management.

But beyond the concerns of the actual voters in Albany, the third Amazon union vote has a story-defining power. Currently, in the battle for existence, the ALU has won one battle, and lost one. The third vote, while in no sense actually fulfilling this role, is likely to be seen as ‘the decider,’ that will either set Amazon on the path to union roll-out votes around the rest of the country, or will confirm the JFK8 vote as an anomalous outlier in the question of whether Amazon staff want to be represented by a union. Certainly, it will feed Amazon’s arguments that unions are not necessary in its facilities if after three votes only one resulted in the formation of a union chapter.

There remains everything to play for, and vote for, as Amazon and its workers all turn their eyes to Albany – all except those who have been suspended at JFK8.