Welcome to Phoenix, the Connected Place 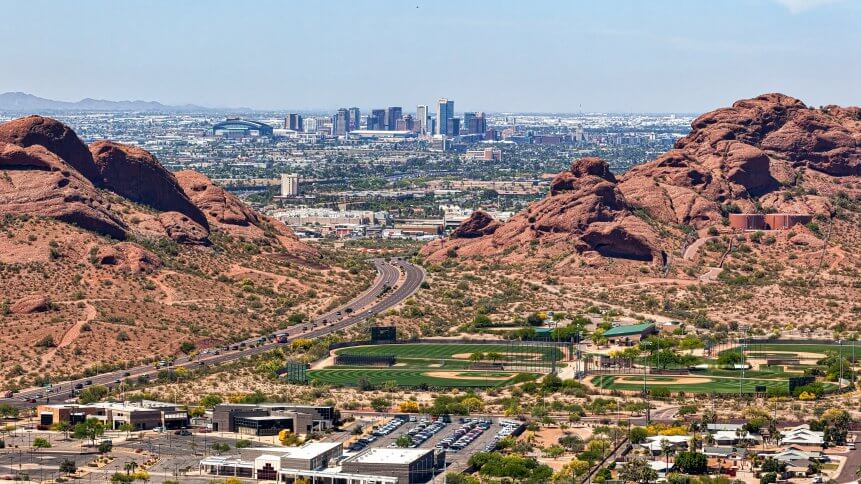 Have you ever noticed that our newsfeeds and timelines fill our heads with problems, but seldom offer any solutions.

Artificial intelligence (AI), automation and an army of robots are all waiting to take our jobs as we head for an uncertain future. But what if we changed that narrative and turned challenges into opportunities?

What if the things that make our life easier, could also make the world better? This is the refreshing mindset adopted by the Greater Phoenix area in Arizona. The migratory market is tempting over one hundred thousand people a year into the Grand Canyon state. A better standard of living and the absence of any natural disasters are making it incredibly appealing for digital natives, but it’s the thriving tech scene that is possibly its biggest attraction.

As the digital transformation gathers pace, it has the same challenges as every region in the world. Rather than clinging onto the past, Phoenix is thriving by embracing emerging technologies rather than fighting them. The area is also is affectionately referred to as the “The Connected Place”, and with more products being manufactured in the Phoenix metro area than in Silicon Valley itself, you can see why.

“The Connected Place extends beyond the fabric of our community,” says Chris Camacho, president and CEO, Greater Phoenix Economic Council. “As a region, we’re dedicated to changing the game and joining forces with emerging disruptors to ensure the region is known as a place where innovation goes to scale”.

Traditional jobs are beginning to disappear and are being replaced by roles that require a new set of skills that are needed to thrive in a digital age. Although this can feel incredibly daunting there is also a tremendous opportunity to stay ahead of the curve by reskilling to enjoy a change in career.

In 1977, Steve Wozniak and Steve Jobs famously embarked on a mission to change the world when they founded Apple. But in a new age of transformational change, Woz now has his sights set on revolutionizing tech education by making it easier to gain the skills required to begin a career in software engineering, data science or cybersecurity.

Woz U is aiming to take those with limited tech skills who are close to entry-level and put them in a position to become a junior developer or software engineer. By addressing the skills shortage directly, the program also aims to provide placements within six months of graduation, with a starting salary of US$75,000.

Woz U has set up camp in Greater Phoenix also to provide school districts with K-12 STEAM projects and launch the Woz Accelerator, an immersive in-person training program. The message is that it’s not too late to join the tech revolution and anyone of any age can upgrade their career path to secure some of the most in-demand and highest paid jobs on the market.

Greater Phoenix also offers the first regulatory sandbox program for fintech. At a time where many States are increasingly nervous around blockchain technology and cryptocurrencies, Arizona has sent an open invitation to fintech partners to come and play in the desert fintech sandbox.

In Arizona’s sandbox, startups, entrepreneurs, and even established companies can launch products on a limited, temporary scale to consumers to test innovative products, services, business models, and delivery mechanisms in the real market without incurring the regulatory costs and burdens that would otherwise be imposed. The Arizona Attorney General’s Office will administer the sandbox.

Waymo cars can be seen on the roads regularly, and there is a belief that technology will eventually make the roads safer. Many dare to predict that future generations will question why we ever let humans drive vehicles on busy roads. But not everybody is happy about their roads being used for beta testing. Tensions are still high in the community after a self-driving Uber struck and killed a pedestrian last year. Some find the technology and future possibilities exciting, but other community members are fearful of being the victim of a real-world mistake during the testing phase.

There were 37,461 crash-related deaths in America in 2016 alone which in many cases were the result of human error. Tech companies in Phoenix are asking the question what if we could make the roads safer and eliminate road rage, once and for all? Intel, for example, predicted that by 2035-2045, 585,000 lives will be saved from driverless vehicles.

However, it’s important to zoom out and look beyond the driverless car. Companies in the region are also responsible for manufacturing along with the components, software, and communications systems that power and operate them. Acceptance and testing will take much longer than the hype suggests but make no mistake; Greater Phoenix is emerging as a self-driving hotbed.

We all know somebody with a tech wearable such as a Fitbit or smartwatch that can track our steps and heart rate. The IoT (Internet of Things) subsector in Greater Phoenix is exploring how wearables can deliver more value to society and transform industries that you do not normally associate with tech.

Sure, wearable devices are ideally suited to the tracking of medical and physical conditions. But, how will these same tiny sensors help transform the world of logistics, supply chains, agriculture, and farming? Businesses in the region are trying to solve real problems with IoT, and the monitoring of crop and livestock conditions are just the beginning of future possibilities.

Greater Phoenix prides itself on creating a connected place built on the foundations of education to deliver a fully connected world and smart city. But, the protection of these permanently connected devices is something that they are also taking very seriously.

Although cybersecurity seldom gets the credit or coverage it deserves, Phoenix has also built a hub for software and services to protect and secure information. The growth in IoT, wearables and a myriad of devices is responsible for an increased emphasis on cybersecurity to protect the vast quantities of data being collected.

It’s no surprise to see why companies such as Dexcom, Kudelski, Intel, and Deloitte are increasing their presence in Greater Phoenix. However, the real story is how the location is addressing the decline of traditional employment, the influx of new jobs and skills shortage by building a connected place to attract both businesses and employees to the area.

The digital transformation is proving to be much more than a buzzword. Phoenix is joining a growing list of so-called surge-cites such as Austin, Nashville, Denver, Portland and Atlanta that are being transformed by embracing technology and thriving as result. Maybe it’s time to retire the apocalyptic news stories and understand that where there are challenges, there are also opportunities.