Mastodon: We came for the experience, and may stay for the quirkiness. 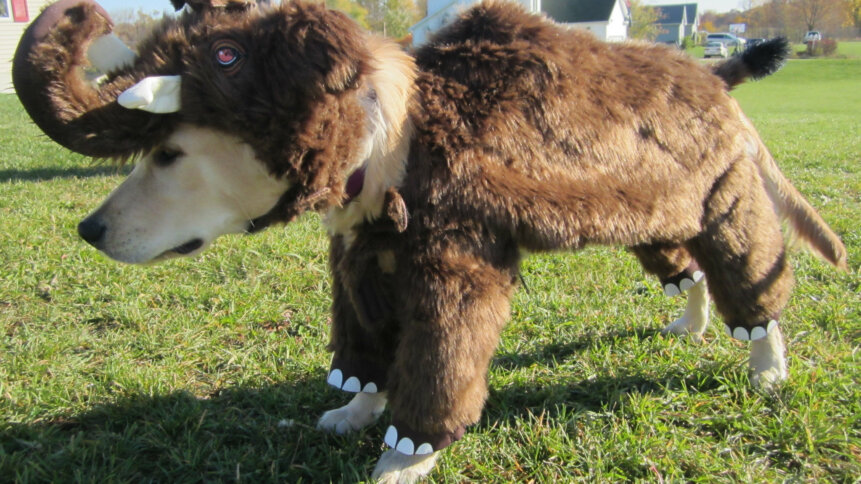 “Wooly Mammoth Dog Costume” by Petful.com is licensed under CC BY 2.0.

Leave Twitter, you say? After Elon Musk acquired the company on October 28, the platform’s revenue was put at risk as (at the time of writing) around one million users did just that and left the site. Musk claims that Twitter will now prioritize free speech, and within hours of his takeover, British far-right figures who had been banned from the site were able to return to the website.

Amid the chaos, an alternative way of micro-blogging using social media has been suggested in the form of Mastodon. Initially released in 2016, the open-source software runs on self-hosted networked services. 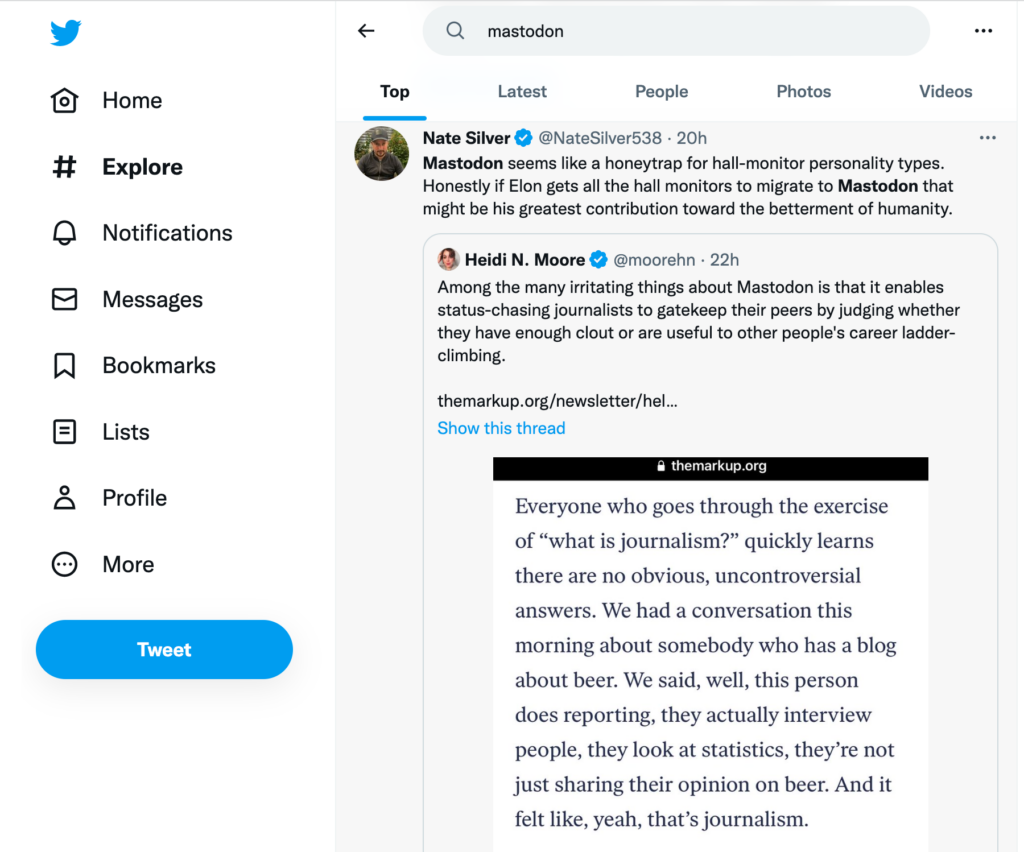 Gaining mainstream attention, quick start guides for joining Mastodon aim to guide new users onto the platform. However, it quickly becomes clear that these articles do a better job of conceptualizing the fediverse in simple terms than anything else. There’s plenty of assurance that super-rich corporations or individuals won’t be able to buy out or control the platform but little indication of how best to start to engage with the new social media “fediverse” of Mastodon.

There’s plenty of guidance on which instance (a term used to identify servers) users should choose. Join a server related to your interests, they say – gaming is a frequent suggestion – but don’t feel restricted by a single interest: you aren’t limited to communicating with users of just one instance. Listicles are already click-baiting the best servers to join. lEaving Twitter can mean refining and defining your niche, it seems.

Opening such a list, we opted for an instance with a pseudo-intellectual pun as its name (title withheld for…reasons) before discovering we would have to apply for an account, not sign up and get started. Each server has its code of conduct, although it has to be said hate speech is universally banned on all instances we looked at. After agreeing to the rules, we were prompted to give a reason for wanting to join this particular server (“the future of investigative journalism” came to mind). Done, we waited to be accepted, excited to set up the Mastodon account and begin tooting. 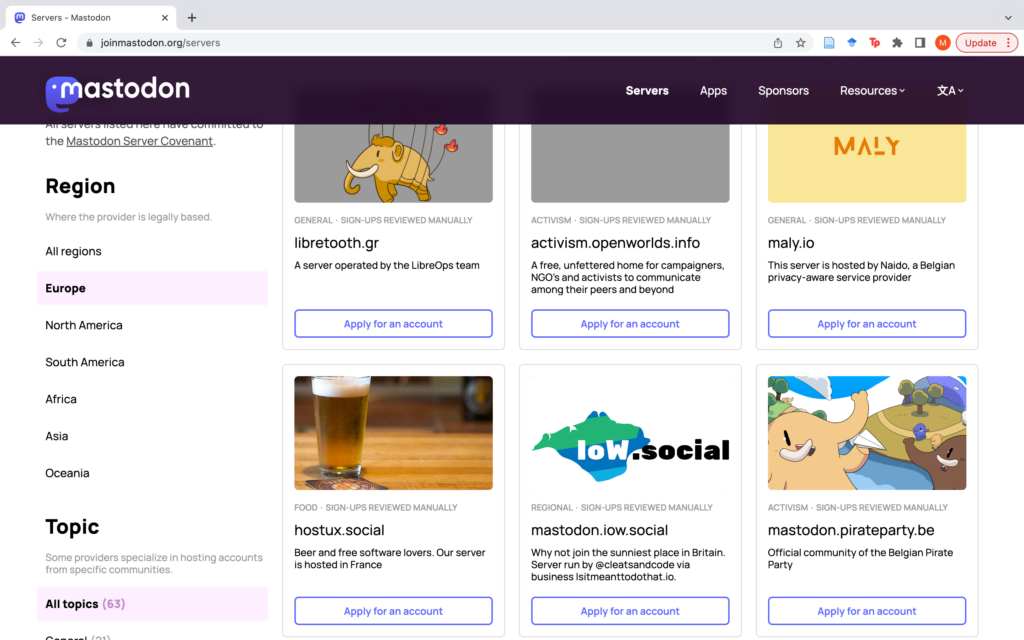 After three days with no response, we headed back to the listicles of instances, this time opting for a server that would allow us to make an account without applying. On signing in, the home page looked a lot like Twitter, albeit with some of the same features laid out in a subtly-modified way.

We navigated through the server to a beginner’s guide, wondering if this might direct us towards other accounts of like-minded bodies on this instance and across the fediverse. Although we’d decided we might leave Twitter, we’d been active on the platform and (personally) on Instagram for years, so we’d forgotten what a vacuum a feed populated by strangers can be. #ThickTrunkTuesday was trending, we guessed as a response to the Twitter habit of innocuous-seeming hashtags used for NSFW content. On Mastodon, however, #thicktrunktuesday noted shared pictures of trees with thick trunks. Posted on Tuesday. So far, so very literal and, in many ways, refreshingly charming, although arguably naive.

One feature of Twitter that Mastodon actively rejects is data tracking. Although the lack of commercials in the feed means targeted ads won’t present an issue, there is an extent to which we began to miss Twitter’s surprisingly prescient suggested topics.

Now part of a Mastodon server, we could choose to view a local newsfeed of posts from others on the same instance or a federated timeline showing public posts from users on other servers on the decentralized network. Reminiscent of the TikTok ‘for you’ page, which shows posts from popular profiles, we guessed this might be where most interactions took place.

The lack of personalization had flip sides, too, which we quickly discovered. We saw posts in several languages and from a mix of public figures and individuals who were both strangers and really very strange. Adding to the confusion, the timeline on our chosen instance refreshed every time a new post was found unless we actively started scrolling. This creates a rush to interact. Along with the randomness of the posts showing up, the sense that anything of interest might disappear quickly gave the site the air of frenzy, as though the wealth of information available would only multiply and leave us behind.

Overwhelmed, we decided on a new approach. The Twitter home page shows topics that are tailored to the interests of each user alongside posts from followed users. Figuring that this was how we started out choosing Twitter accounts to follow, we searched a hashtag that frequently comes up on Twitter timelines, lunch. On Mastodon, these posts were reassuringly familiar if coming from a slightly older demographic: mundane commentary on what strangers were eating accompanied by low-res pictures of home-cooked meals. 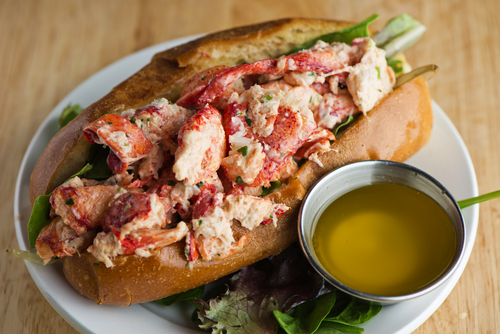 Notably, these posts were fairly frequently censored for being explicit. Opting to view anyway, we were surprised that the so-called ‘sensitive content’ being hidden was all perfectly innocent. Perhaps the odd steak sandwich or crepe photo had a questionable color palette, but it felt as though a blanket ban had been placed on any picture uploaded. Maybe the instance administrators had tightened restrictions to ensure the Twitter exodus wouldn’t swamp their servers with media that (to put it delicately) was dominated by flesh tones.

Without a mass exodus from Twitter, a place where new usernames are being shared so followers can follow the account over to Mastodon, the collective fediverse may not stack up to the singular site many are claiming it replaces. Perhaps a replica of Twitter isn’t what’s needed, but new users of the alternative paradigm may come to their instance expecting more polish than they get. After so long of having our tastes second-guessed and confirmation bias making our social media lives a comforting experience, mere “normals” may be unsettled by self-driven content consumption.

To enjoy this new social network would be to invest in what looks, to an outsider, like a firehose of content without direction until it becomes engaging enough to get a user hooked. As avid scrollers, we can’t rule out a move to Mastodon, although whether this will replace or supplement Twitter remains to be seen.