The sales of iPhones in China slumped by 27% last week, a third successive week of increasingly steep drops. 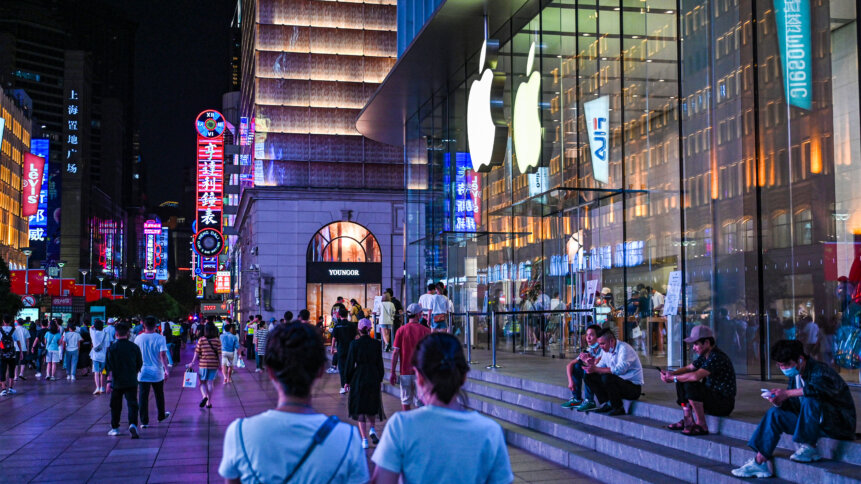 In the last three months of 2021 Apple became the top-selling smartphone brand in China — for the first time in six years. By the second quarter of this year, Apple’s iPhones made up half of all smartphones sold in China, a feat it maintained up to the third quarter of this year. Between July and September 2022, Apple was the only winner among China’s struggling smartphone vendors, as strong sales of the iPhone 14 drew a sharp contrast to the weak performance of domestic brands.

Apple’s run to the top was impressive, but it was far from a smooth journey. In the first quarter of this year, right after making it to the top of China’s smartphone charts for the first time, Apple fell back behind its Chinese rivals. Between January and March 2022, the tech giant suffered more than others from a slump in sales — and it appears that history might well repeat itself in the final quarter of this year.

For a company whose smartphones have mostly been resilient to the global economic downturn, the endless Covid-19 outbreak in China is finally hitting Apple, and it is hitting it hard. Just as Apple gears up for the holiday season, Foxconn, the world’s largest iPhone maker, is faced with a Covid flare-up at its main Zhengzhou plant, a situation that could eventually hurt production. The Taiwanese company also makes iPhones at a factory in Shenzhen, which, together with Zhengzhou, cranks out the majority of the world’s iPhones.

According to Foxconn’s statement to The New York Times, efforts to control the outbreak are “progressing steadily” and the quarantined employees are being provided with what they need, including “material supplies, psychological comfort and responsive feedback.” Over the weekend, social media erupted with photos and videos of workers departing the Zhengzhou plant.

Reports indicated that they were seeking to escape hastily enacted Covid-prevention measures that have left many of the 200,000 staff grappling with inadequate living conditions. On top of that, sales of iPhones in China slumped by 27% in the week of October 24, a third successive week of increasingly steep drops for Apple. Even adjusting for the device’s earlier release this year, the negative trend continues and has been worse than the recent drops for Android rivals, Jefferies analysts including Edison Lee wrote in a note on Sunday.

In the three months to September, sales of iPhone in China were up 5.7% compared to a 15.2% fall for Android alternatives, Lee wrote. That changed in the past month and Apple may have shed four to five percentage points in market share in the country, according to Lee’s estimates. “While the iPhone used to be the bright spot, it has become less bright and recent data points indicate a risk that it could potentially become the worst spot,” Lee wrote. “This is an incremental negative trend for the smartphone market, but a particular concern for the iPhone supply chain.”

Morgan Stanley analysts believe that further developments will be important as Q4 is the peak season for iPhone shipments. “The potential impact on iPhone production is worth monitoring as Zhengzhou is one of Hon Hai’s major production sites, particularly for iPhone assembly.” Apple has also ditched plans to increase production of its iPhone 14 product family, according to a Bloomberg report last month.

Even though the company reported better-than-expected results last Thursday, Apple itself has warned of a holiday slowdown. Now, disruption at Zhengzhou threatens to snarl the tech giant’s finely orchestrated supply chain, which could be a double whammy for the company that has seen demand weakening.