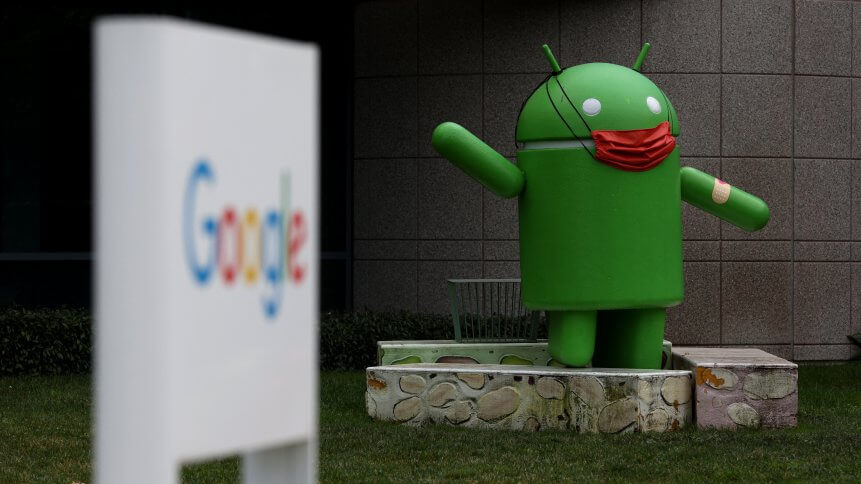 An Android statue is displayed in front of a building on the Google campus in Mountain View, California. (Photo by JUSTIN SULLIVAN / GETTY IMAGES NORTH AMERICA / Getty Images via AFP)

The tech giant had a net income of US$20.6 billion on revenue that grew 32%t to US$75 billion in the final quarter of 2021, ending the year with a total of US$76 billion in profit. That was nearly double the US$40 billion annual profit reported for 2020, as the pandemic had already accelerated a shift to online shopping, working, and learning that also benefited fellow giants like Amazon and Facebook.

Alphabet CEO Sundar Pichai cited “strong growth in our advertising business[…] a quarterly sales record for our Pixel phones despite supply constraints, and our cloud business continuing to grow strongly” for the success. In all, Google earned more than US$61 billion in advertising revenue, mostly from online search and its video platform, while its cloud business grew by 45% to US$5.5 billion in revenue.

Google’s dominance online has powered it to new heights during the pandemic period, but has also left it in the sights of regulators around the world. Pichai said during an earnings call that Alphabet is open to “sensible” regulation by Congress but is “genuinely concerned that they could break a wide range of popular services we offer to our users.”

Some regulatory proposals could have unintended consequences such as weakening privacy and safety, or putting US companies at a disadvantage, according to Pichai.

Alphabet’s strong earnings come after Apple, another pandemic-era winner, reported record revenue last week as markets were jittery about tech’s future as well as geopolitical risks like the Ukraine crisis. However, regulators’ scrutiny around the world is stacking up as one of the most significant risks for the Silicon Valley giant.

“Google has the biggest uphill battle in terms of antitrust issues among all of the Big Tech companies,” Third Bridge analyst Scott Kessler wrote. “Despite Apple’s bigger size and Meta/Facebook’s bad publicity, Google is seen most at risk in terms of US antitrust law.”

Just last week, a group of top US justice officials accused Google in lawsuits of tracking and profiting from users’ location data, despite leading consumers to think they could protect their privacy on the tech giant’s services. These suits are the latest legal threats against Alphabet cash cow Google and other US Big Tech giants, which have long faced probes and court cases but a lack of new national laws that would regulate their businesses.

The courts and legislatures are not moving fast. Two weeks ago, for example, Google appealed a European court ruling that upheld a 2.4 billion-euro fine imposed by Brussels in 2017 for anti-competitive practices in the price comparison market.

Fortunes were quite different for Google, with Alphabet saying its board had approved a 20-to-1 stock split that would make shares more affordable to small investors. The firm predicts that its growth will continue in 2022, with digital advertising expected to bring in more than US$171 billion to Google this year, or 30% of the global pie, just ahead of Facebook.

“In the fourth quarter, retail was again by far the largest contributor to year-on-year growth of our ads business,” Alphabet CBO Philipp Schindler told analysts. “Finance, entertainment, and travel were also strong contributors,” he added.