For the first time since 2018, Samsung Electronics passed Intel and earned the top spot for an entire year. 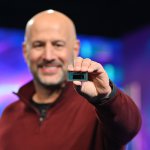 The semiconductor shortage, triggered by an excess of demand, has allowed chipmakers to boost sales and score record revenues over the last two years. It is however fair to say that not all chipmakers reaped the benefits of the hike in demand–at least equally. Take 2021 for an example, when Intel — a pioneering force of the global chip industry — lost its top sales spot to its rival Samsung Electronics, according to preliminary data by Gartner.

The South Korean giant ended last year as the world’s top vendor of semiconductors with a 31.6% increase in revenue, overtaking Intel for the first time since 2018. The technology analyst firm Gartner also highlighted that global semiconductor revenues increased 25.1% in 2021 to total US$583.5 billion. 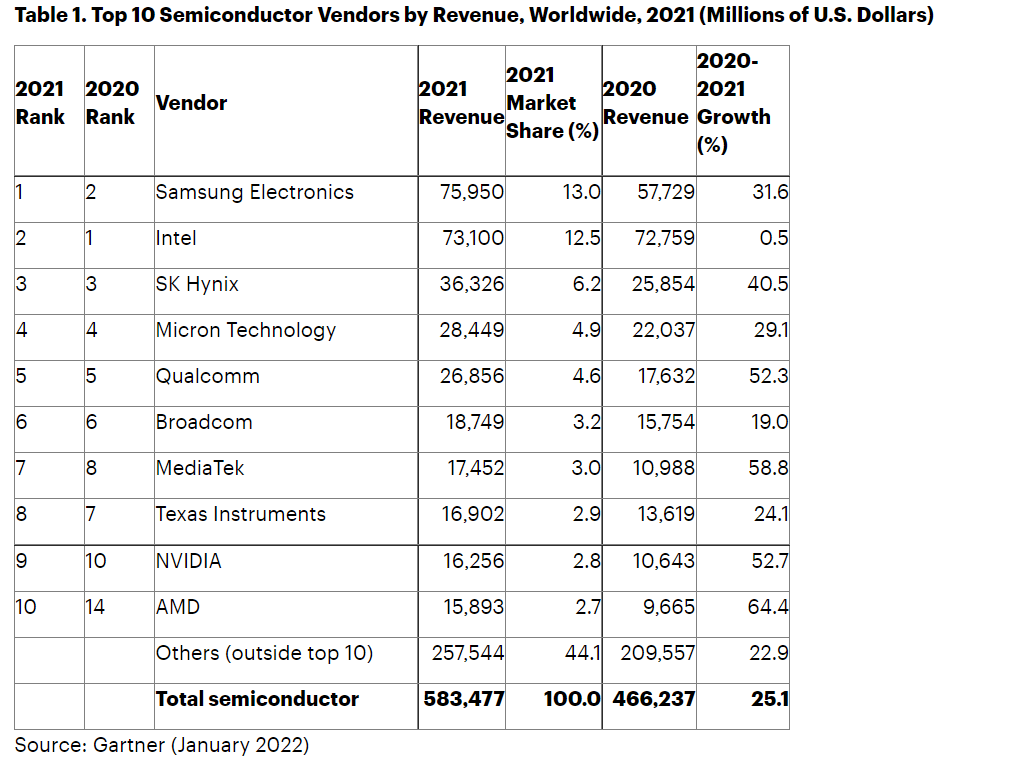 Overall, within the memory category, DRAM topped with revenue growth of 40.4% in 2021, increasing to US$92.5 billion in 2021. Attributing to Samsung’s rise is indeed the increased revenue from its memory sales that rose by 34.2%. Meanwhile Intel dropped to the second spot, with a mere half percent growth — the lowest among the top 25 vendors.

“Memory was again the best-performing device category, primarily due to increased server deployments by hyperscale cloud providers to satisfy remote working, learning and entertainment needs, as well as a surge in end-market demand for PCs and ultramobiles. Revenue increased US$42.1 billion over 2020, which amounted to 33.8% of overall semiconductor revenue growth in 2021,” Gartner’s statement reads.

To top it off, strong demand from servers and PCs created a DRAM undersupply that drove double-digit average selling prices for most of the year.

With a more-than-double unit production, the 5G smartphone market helped drive semiconductor revenue, having produced 555 million units over the course of 12 months. The amount produced in 2020 was half of the total at 250 million.

“The US sanctions imposed on Huawei resulted in other Chinese smartphone OEMs gaining share and fueling growth for 5G chipset vendors such as Qualcomm, MediaTek and Skyworks,” Andrew said. HiSilicon, Huawei’s chip subsidiary, unfortunately saw revenue decline from US$8.2 billion in 2020 to around US$1 billion in 2021.

Is Intel losing its luster, while Samsung shines brighter?

Looking back, Intel has had less-than-ideal two years, having suffered multiple setbacks. In 2020, the California company delayed the launch of its most cutting-edge chipset by two years, losing ground to competiters. Then, Intel lost a lucrative and long-standing contract to supply chips for Apple’s Macs.

Making matters worse yet was when Intel, began outsourcing production of its core chipsets in 2021 to a third-party manufacturer, Taiwan Semiconductor Manufacturing Co. (TSMC), for the first time ever. The move was because Intel’s own manufacturing plants were no longer advanced enough to produce the chips inhouse.

An article by Bloomberg described that while the US chip giant seems to be losing its crown to Samsung, Intel’s demise is not on the cards. “No one is predicting Intel’s demise. It still produces the vast majority of the world’s computer processors, more complex than the memory chips Samsung specializes in, and rakes in an enormous amount of cash with high profit margins.”

Still, the writer said, Samsung surpassing Intel would be a significant shift. “Intel, one of the companies that first put silicon in Silicon Valley, has dominated the US$400 billion semiconductor industry for most of the past 30 years.

Intel is also expected to make an announcement today, on its plans to build up semiconductor production in the US — in an effort to restore the chip maker’s edge in manufacturing technology.

@Intel @PGelsinger and @KeyvanEsfarjani will announce Friday, the company's plans for semiconductor production in the US. pic.twitter.com/ah2kpgLA3g