We are in the middle of the biggest revolution in motoring since Henry Ford's first assembly line was installed in 1913. Are we moving faster than expected? 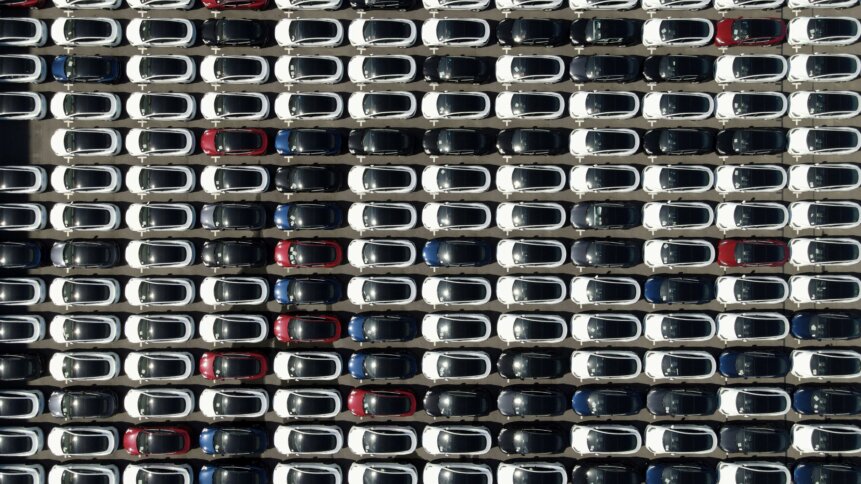 Has 2021 really been a pivotal year for electric vehicles? (Photo by Sam Yeh / AFP)

They said the 2020s will be the decade of the electric car — and they are not wrong. For starters, despite a pandemic-related worldwide downturn in car sales, the global sales of electric vehicles (EVs) increased by a staggering 41% in 2020. Even better, by 2021 EV sales around the world grew by a record 160% within the first half of the year alone.

Contributing to the resilience of EV sales in the face of the pandemic were efforts by automakers who have been shaking up and electrifying their lineups. There have also been supportive regulatory frameworks put in place, more governments announcing incentives to safeguard EV sales from an economic downturn, and perhaps more importantly, the expansion of the number of EV models while battery costs had continued to fall.

Did the public embrace electric vehicles better in 2021?

If you look into every major technological advancement we have endured over the past centuries, they all follow remarkably similar paths to broad adoption. As Rapid Shift put in its report, “they putter along until they hit that magic sweet spot of value and convenience — and then they take off. Adoption rapidly increases until the market is close to saturated, when it trails off.”

To put it in context, much like the internet in the 90s, the electric car market is now growing exponentially. As of now, it is estimated that drivers around the world will buy around 5.6 million electric passenger vehicles this year, according to a recent report from BloombergNEF released in concert with the COP26 United Nations Climate Change Conference. 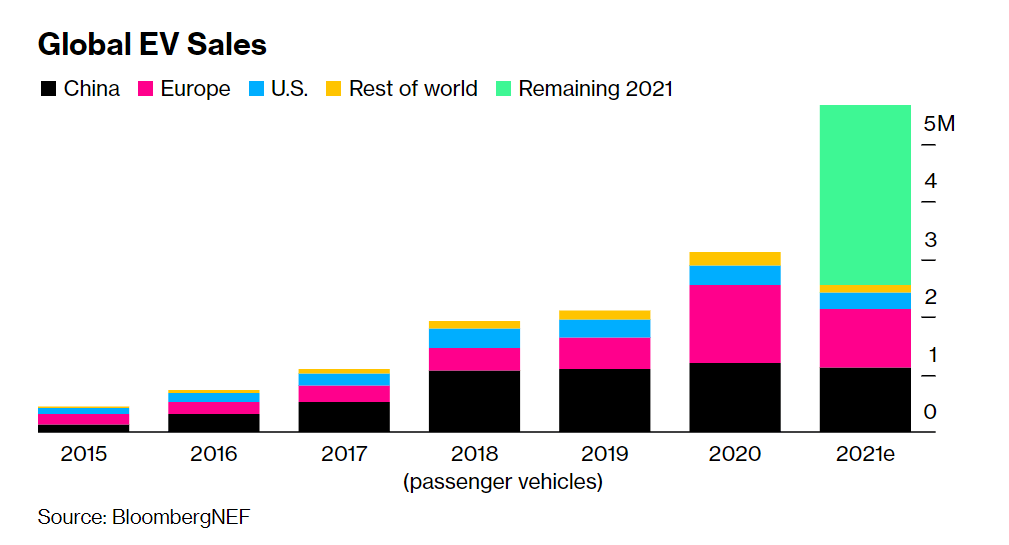 That is basically double the number purchased last year and, more importantly, it represents almost 8% of all vehicle sales. The more interesting fact is that today, there are more than 500 models of EVs and fuel cell vehicles available for sale — just six years ago, that figure was under 100.

The more apparent interest is mainly attributed to the flurry of investments in a range of areas, from charging infrastructure to energy storage and transmission, involving a combination of government, utility, and private firms around the world. In fact, with many governments around the world setting targets to ban the sale of petrol and diesel vehicles, it indirectly gives impetus to the entire transition process.

Who leads adoption of electric vehicles in 2021?

It is widely known that the two leading markets are mainland China and Europe. According to Canalys, for the first six months of this year, 1.1 million EVs were sold in China, accounting for 12% of all passenger cars sold there. In Europe, one million EVs were sold, accounting for 15% of new cars. Combined, sales of EVs in the two markets represented 87% of all EV sales worldwide. In a rather meek comparison, the US EV market continues to lag with only 250,000 EVs sold up till June this year, only 3% of new cars sold there.

Canalys’ VP, Automotive and Emobility, Sandy Fitzpatrick said, “In some European countries, EVs represent more than a quarter of new cars sold. Norway remains the global leader for EV adoption at over 80% of new car sales.” To top it off, companies are expanding their EV line-ups, offering consumers more choices.

Considering how the European Union has set emissions targets for carmakers, individual European countries are offering consumer incentives and have set targets to ban the sale of combustion engine vehicles, according to Fitzpatrick. “The challenge for the carmakers is keeping up with EV demand during the component shortage crisis,” she added.

To top it off, there were around 65 new EV models launched in Europe last year, according to a report by Wall Street Journal — twice as many as in China — and another 99 are slated to come to market this year. That compares with 15 launches in North America last year, ahead of a planned 64 this year.

The US on the other hand has a rather poor EV uptake, particularly compared with the Chinese mainland. That brings us to President Biden’s proposed US$174 billion investment with incentives and substantial charging infrastructure deployments to “win the EV market”. Biden has even committed to having 40% to 50% of all new cars sales be EVs by 2030. 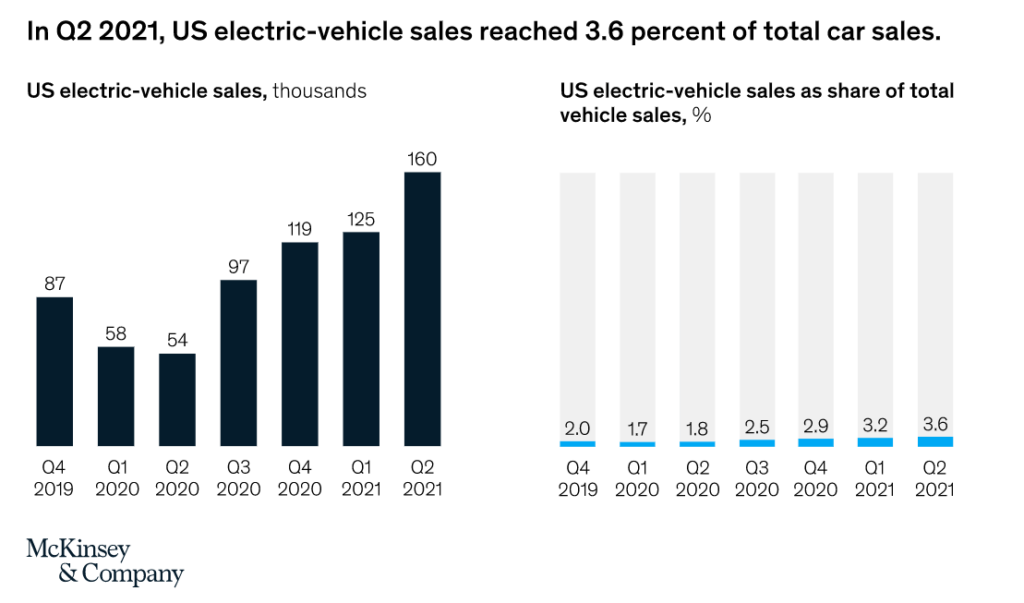 Unfortunately, another recent report has found that electric cars will make up just 4% of American sales in 2021, compared with 9% in China and 14% of new sales in Europe. However, it is not all doom and gloom for the States.

As per McKinsey’s data, while the US lags behind the two other regions, EV sales increased nearly 200% between the second quarter of 2020 and the second quarter of 2021, contributing to a domestic penetration rate of 3.6% during the pandemic. Frankly, analysts and forecasters differ on how many EVs will be sold this decade, but most agree the adoption will be rapid, but likely won’t meet President Joe Biden’s executive order.

The question also remains if the US can bolster EV development. Data shows that the US needs at least 2.4 million charging stations to support 26 million electric vehicles by 2030 and according to the Department of Energy, there are only 43,800 EV charging stations and 136,500 gas stations across the country to date. If anything, it will take more than just a goal to catch up with China and Europe in this market.