Joining a growing list of emerging markets, the Central Bank of Nigeria recently introduced its own digital currency, the eNaira. Africa’s largest economy Nigeria is set to follow the pathway of China, the Bahamas, the Eastern Caribbean Central Bank, and others in adopting a central bank-backed digital currency. Officially the first country in Africa to adopt the digitization of its national currency, Nigeria began issuing eNaira this week.

President Muhammadu Buhari said in a televised speech during the launch that the introduction of a central bank digital currency (CBDC) would cut transaction costs and boost participation in the formal financial system. “The adoption of the central bank digital currency and its underlying technology, called blockchain, can increase Nigeria’s gross domestic product by US$29 billion over the next 10 years,” he said.

The digital currency of Nigeria would also “help move many more people and businesses from the informal into the formal sector, thereby increasing the tax base of the country,” he added.

Prior to the pilot launch, CBN picked Barbados-based Bitt Inc in August to develop and roll out the digital currency. Bitt Inc also assisted the Eastern Caribbean Currency Union (ECCU) to design and launch DCash, the digital currency used by Antigua and Barbuda, Grenada, Saint Kitts and Nevis, and Saint Lucia — four of the five countries that have fully launched their own CBDCs.

The CBN in February this year outlawed banks and financial institutions from transacting or operating in cryptocurrencies, believing the digital denominations posed a threat to the financial system. Nigeria has been seeing a boom of cryptocurrencies prior to that, as people looked for ways to avoid the weakening naira currency and to counter soaring costs of living, on top of the high unemployment in Africa’s most populous country.

According to the central bank governor Godwin Emefiele, since the launch the eNaira platform has received over 2.5 million daily visits, with 33 banks integrated onto the platform, 500 million eNairas (US$1.2 million) successfully minted, and more than 2,000 customers onboarded.

Despite Nigeria’s central bank’s efforts to stabilize the currency, the physical naira has weakened by 5.6% this year. Therefore, as Bloomberg puts it, the eNaira will complement the physical currency. “The eNaira and the physical naira will have the same value and will always exchange at one naira to one eNaira,” Emefiele commented. 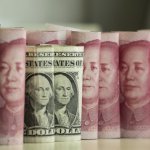 The Chinese digital currency is moving forward – will the US follow?

Nigeria is by no means the only sovereign country exploring CBDCs. As a matter of fact today, most central banks are working on CDBC projects and, as announced by the European Central Bank, the project of a ‘digital euro‘ could see the light of day in as little as five years. The wave towards centrally-backed digital currencies has never been so strong, to the point PwC said in a report that, “in order to support these societal changes, improve the efficiency of payment systems and remain competitive, central banks are exploring the potential of innovative technologies. The ambition of creating a CBDC is not to replace cash but to offer an alternative.”

How to use the digital currency of Nigeria

When CBN launched the eNaira website, it also indicated how Nigerians can access and use the virtual currency. To begin with, Nigerians will have to download the eNaira mobile application on the Apple Store or Play Store. They can also opt to scan a QR code on the website to gain access to the service.

Upon registration, users must register and create a wallet — the Speed Wallet — to store, send and receive money. Several tiers of wallets are available on the platform catering to various users, with or without bank accounts, and different identification levels.

Among the four main eNaira features listed on the website includes a unified payment system that allows customers to move money from their eNaira wallet; a bank account management feature that lets users check balances and transaction histories; a contactless payment service so users can make in-store payments by scanning QR codes; and P2P payments, in which users send money to each other via a linked bank account or card.