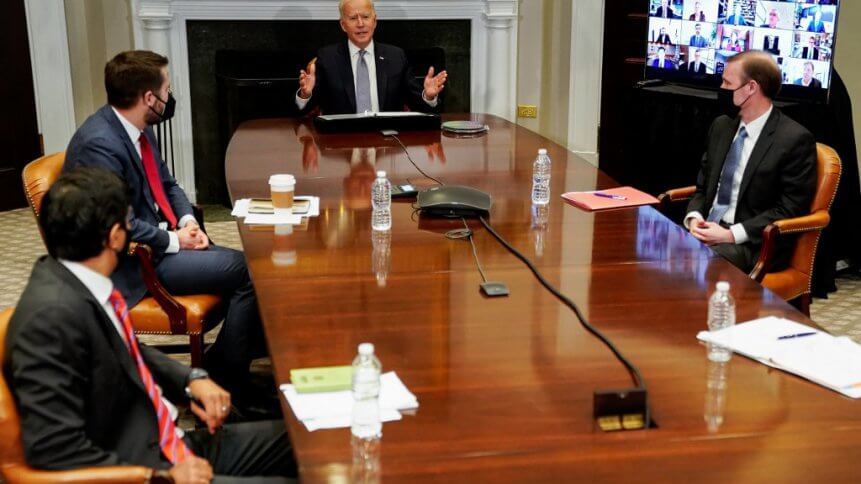 President Joe Biden (C) speaks during a CEO Summit on Semiconductor and Supply Chain Resilience which focused on the global shortage of semiconductors – computer chips that run everything from televisions and mobile phones to cars and games consoles. (Photo by POOL / GETTY IMAGES NORTH AMERICA / Getty Images via AFP)

President Joe Biden met virtually Monday with leading CEOs for a summit on the semiconductor shortage as he works to build support for his infrastructure bill.

Biden, in brief remarks to a group that included the leaders of General Motors, Alphabet/Google, and US semiconductor powerhouse Intel, said the United States must build up its own infrastructure to prevent future supply shortage crises. “We led the world in the middle of the 20th century,” Biden said. “We led the world toward the end of the century, we’re going to lead the world again.”

“I’ve been saying for some time now, China and the rest of the world [are] not waiting. And there’s no reason why Americans should wait,” the president said. “We’re investing aggressively in areas like semiconductors and batteries, that’s what they’re doing and others, so must we.” The gathering, which is being led by National Security Advisor Jake Sullivan, National Economic Council Director Brian Deese, and the Secretary of Commerce, Gina Raimondo, comes as a shortage of semiconductors wreaks havoc on supply chains in several sectors.

The crunch has badly dented US auto manufacturing, with General Motors, Ford, and other carmakers temporarily shuttering some factories or reducing production. The shortage has also raised worries throughout the personal electronics universe, generating potentially higher prices for popular gadgets like game consoles and computer tablets.

In all, 19 company bosses are listed as attending, also including Mark Liu, executive chairman of the Taiwan Semiconductor Manufacturing Company (TSMC), one of the lynchpins in the world’s supply for the vital electronic components.

The White House said in a readout of the meeting that participants had “discussed the importance of encouraging additional semiconductor manufacturing capacity in the United States to make sure we never again face shortages.” The event came on the heels of Biden’s February 24 executive order calling for a 100-day review across federal agencies on semiconductors and three other key items: pharmaceuticals, critical minerals, and large capacity batteries.

Policymakers are focused on building additional semiconductor capacity in the United States, but experts say there are limited remedies in the near term. White House spokeswoman Jen Psaki described the event as more of a listening session “and not a meeting where we expect a decision or an announcement.” 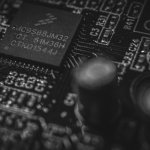 Biden also pointed to the semiconductor shortage as he seeks to build a case for a $2 trillion infrastructure package. A White House handout last week on the infrastructure plan endorsed $50 billion for a new Commerce Department office to support production of critical goods and backed congressional legislation to invest another $50 billion in semiconductor manufacturing and research.

Addressing the CEOs, Biden said he was “ready to work with all of you, with the Congress, both parties to pass the American Job plan, and to make a once in a generation investment in America’s future.”