The central bank will only decide whether to launch a digital euro project towards mid-2021. 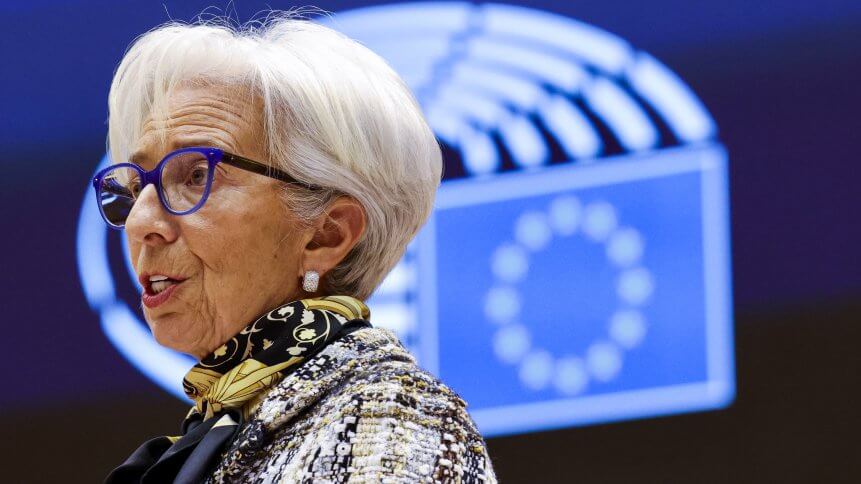 Will the ECB go ahead with the digital euro project? (Photo by Olivier Matthys / POOL / AFP)

The European Central Bank (ECB) sets the monetary policy for 340 million people in the 19-nation eurozone, and is now dangling the prospect of launching a digital euro, which it said would be “an electronic form of central bank money accessible to all citizens and firms.” The ECB proposal is for creating a free, safe, and trusted way to make payments in an increasingly digital world, where the pandemic is hastening the decline of cash.

Experts however reckon that the move is ECB’s counter-punch to the dizzying rise of cryptocurrencies like Bitcoin and Ethereum, the explosion in adoption of commercial fintech services from PayPal to Revolut, and the advent of digital currencies such as the proposed Facebook-backed Diem (formerly Libra). A creeping danger that the big tech firms could grab a bigger share of Europe’s banking pie, potentially weakening the ECB’s grip on the continent’s financial system, is ECB’s presumed apprehension that fuels the push towards a digital currency in Europe.

ECB stated that “In this new era, a digital euro would guarantee that citizens in the euro area can maintain costless access to a simple, universally accepted, safe and trusted means of payment. The digital currency would still be a euro: like banknotes but digital. It would be an electronic form of money issued by the Eurosystem (comprising the ECB and the respective national central banks) and accessible to all citizens and firms.”

In short, a digital euro would not replace cash, but rather complement it. The Eurosystem will continue to ensure access to euro cash across the European territories where it is accepted. President of the ECB, Christine Lagarde, emphasized that “the euro belongs to Europeans and we are its guardian. We should be prepared to issue a digital currency, should the need arise.”

Analysts reckon that the advantages of a European digital currency plus the rapid changes in the retail payment landscape imply that the Eurosystem needs to be equipped to issue it in the future. Basically, a digital euro could support the Eurosystem’s objectives, providing citizens with access to a secured form of money in the fast-changing digital world. It would also contribute to its strategic autonomy by providing an alternative to foreign payment providers, for fast and efficient payments in Europe and beyond.

“A digital euro may even become essential in a number of possible scenarios. For example, if the use of cash were to decline significantly, other electronic payment methods were to become unavailable owing to extreme events, or foreign digital money was to largely displace existing means of payment,” ECB’s report stated.

In the absence of a digital euro, the Eurosystem would need to identify alternative tools to respond to the possible materialization of one or more of these scenarios. For example, a decline in the use of cash as a means of payment could exacerbate financial exclusion for the “unbanked” and for vulnerable groups in our society, forcing the central bank to intervene.

“The introduction of a digital euro could address multiple scenarios at once, but it would have profound implications for key areas of central banking, for the broader economic and financial system, and, ultimately, for the life of European citizens,” it added. Notably, the digital euro could represent an option for reducing the overall costs and ecological footprint associated with the present physical monetary systems.

When will it be ready?

Truth be told, the ECB has yet to decide whether to issue a digital euro but they are currently in a preparation phase: “We are developing the concept, conducting practical experimentation, listening to the views of the broader public and engaging with stakeholders. We will decide whether to launch a digital euro project towards the middle of 2021, in order to be prepared for the possible issuance of a digital euro at some point in the future,” the central regulator said.

The ECB also stated that the Eurosystem would design the digital euro in such a way as to avoid possible undesirable implications for the fulfillment of its mandate, for the financial industry, and for the broader economy.  But, just as banknotes were an important innovation for central banks and bank deposits gave commercial banks a greater role in intermediation, the ongoing digitalization of money and payments is challenging the established structure of the financial system.

In short, a digital euro represents a natural evolution in response to this transformation – not only to underpin efficiency and innovation but also to preserve the role of the central bank in offering a safe means of payment.