Which country is emerging as the global leader in AI?

There is an alarm over China’s rapid progress and the current prospect of it overtaking the US in applying AI in the decade ahead. 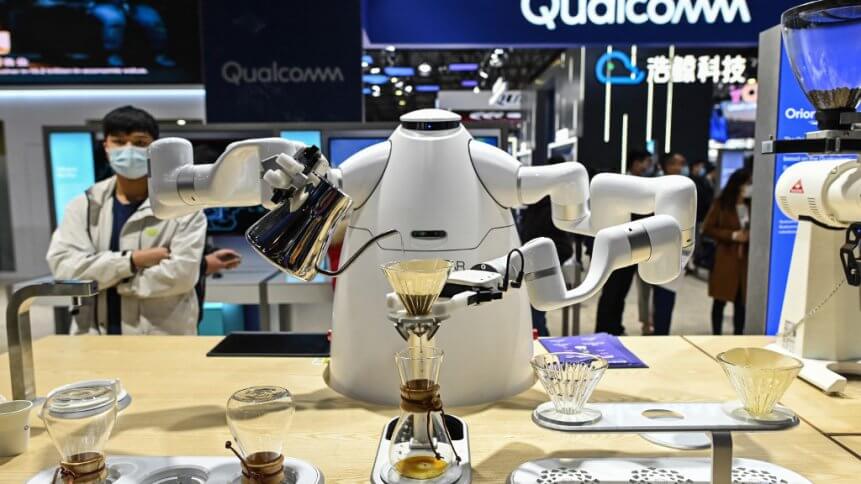 A robot prepares a coffee at a booth during the Mobile World Congress in Shanghai on February 23, 2021. (Photo by Hector RETAMAL / AFP)

The Americans may believe that the United States (US) leadership in advanced technologies is so entrenched that it is unassailable — but they are wrong. While the American national security community insists that in the artificial intelligence (AI) arena, China can never be more than a “near-peer competitor”, China today stands today as a full-spectrum peer competitor of the US in commercial and national security applications of AI.

In fact, Beijing is not just trying to master AI — it is succeeding. Given how AI will have as transformative an impact on commerce and national security over the next two decades as semiconductors, computers and the web have had over the past quarter-century, this is recognized as a matter of grave national concern for the Americans. To recap, China introduced its Artificial Intelligence Development Plan (AIDP) in 2017 to make China an AI superpower by 2030, surpassing its rivals to become “the world’s premier artificial intelligence innovation center”. The country also aims to monetize AI into a trillion-yuan industry and to emerge as the driving force in defining ethical norms and standards for AI. Following that, the Chinese government-backed up its AI plans with significant state subsidies.

By 2025, China aims to have achieved a “major breakthrough” in basic AI theory and to be world-leading in some applications. The country also targets an increase in the worth of its core AI industry to over 400 billion yuan (US$61.4 billion), and plans to expand upon, and codify in law, ethical standards for AI.

By 2030, China seeks to become the world’s innovation center for AI. By then, growth in the core AI industry is expected to more than double again and be valued at 1 trillion yuan (US$153.6 billion), and further upgrades in the laws and standards are also to be expected, to deal with newly emerging challenges.

Based on Harvard Business Review’s report, China’s feat is dramatic and its global share of research papers in the field of AI has vaulted from 4.26% (1,086) in 1997 to 27.68% in 2017 (37,343), surpassing any other country in the world, including the US — a position it continues to hold. China also consistently files more AI patents than any other country. As of March 2019, the number of Chinese AI firms has reached 1,189, second only to the US, which has more than 2,000 active AI firms. These firms focus more on speech and vision than their overseas counterparts.

The upside for China, which is a downside for many, is the country’s lack of clear policies and regulations in areas such as privacy. That explains how it caught up so rapidly in certain AI application fields. For example, the ubiquity of surveillance cameras in China creates a big market for AI firms specializing in visual and facial recognition. This market would not have grown so fast in many other countries with tighter regulations on privacy.

What is the US doing about it?

In its final report to Congress a week ago, the US national security commission said “the United States can compete against China without ending collaborative AI research and severing all technology commerce. The US-China competition is complicated by the complex web of supply chains, research partnerships, and business relationships that link the world’s two AI leaders,” according to the commission, chaired by former Google CEO Eric Schmidt.

The commission also believes that “dramatic steps to sever these ties could be costly for Americans and reverberate across the world.” To meet that challenge, the US must make public policy choices to preserve American advantages, according to NSCAI. Schmidt proposed a technology competitiveness council to be set up within the White House and called for robust government funding for research. “We do need more money, particularly in AI R&D so that by 2026, we get to US$32 billion per year,” he said.

While the report said it is “not calling for a state-directed economy, a five-year plan, or China-style ‘military-civil fusion’”, it is urging a more prominent government-led process. “The government has a long history of mobilizing industry and academia and making huge investments when it is challenged. Against the backdrop of a declared and committed competitor like China, and given AI’s transformative potential, the United States is confronting such a moment,” said the report. To confront the competition, the other country must find ways to attract AI talent, expand research areas by allowing more access to data, and staying ahead in semiconductor design.