Is the pandemic highlighting just how powerful (and invasive) smart city technology will be?

Where do we draw the lines of privacy amid a pandemic? Source: AFP

Smart cities rely on the collective intelligence derived from the technologies embedded into the framework and services of its future-forward metropolis.

The smart city concept is built on data. Fed back from a metropolis’s worth of sensors and endpoints, data provides insights into how assets, resources, and services are being used and how they can be managed more efficiently. 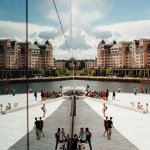 Smart cities with privacy in mind? Norway is making a start

The data – which could be collected from citizens, devices or other assets are processed and analyzed to better manage anything from traffic and transport, power plants, water supplies, waste management.

These IoT-powered systems could even detect crime or track citizen’s health through city hospital visits, in the case of the coronavirus outbreak, they can provide masses of highly valuable big data to help researchers and organizations combat the global health crisis.

One example of applying smart city data in this way is happening right now at the University of Newcastle in the United Kingdom.

Researchers from the Newcastle University Urban Observatory have been using a suite of technologies to measure the impact of social distancing practices on people as well as vehicle mobility within the metropolitan city in real-time.

The team collected information on traffic and pedestrian flow, looking at things like congestion and car park occupancy, using an array of sensors and data sharing agreements. These numbers were then plotted against similarly collected data from 2019.

After analyzing 1.8 billion pieces of observational and other data sources, the team found “pedestrian movement has reduced by 95 percent when compared to the annual average.” This finding suggests the effectiveness in the UK’s effort in enforcing social distancing measures.

Project Director, Philip James, shared a video on how machine learning was used to monitor pedestrian flow and measure social distancing. The clip illustrates how surveillance cameras can be used in combination with machine learning to gather data on mobility patterns.

Meanwhile in South Korea, the use of smart technology in cities to curb the spread of the pandemic is carried out on a much larger scale. In Seoul, a dashboard providing updates in real-time has played a major role in flattening the infamous curve.

The dashboard not only reveals the number of infected patients and recovery rates, but also carries details that include the patient’s residence and the activities they engaged in days before being admitted to the hospital.

More detailed information like the restaurants that were visited by patients and cinema seat numbers booked can be accessed via the dashboard.

On this database, the patient’s identity is preserved and they aren’t named on the Ministry of Health and Welfare website. Citizens are informed of the personal information collected and the disclosure of their recent whereabouts. Patients are allowed to opt-out or refuse inquiries, as reported in WSJ.

This approach may not bode well with regional regulations such as the European Union’s General Data Protection Regulation (GDPR). This regulation protects and prioritizes the privacy of an individual’s data above all else, but Korea’s response comes from its previous experience in handling other virus outbreaks.

Disseminating vast quantities of data to the public was a lesson learned from their past response towards Middle East Respiratory Syndrome (MERS), another illness also caused by a coronavirus.

The government’s slow response to address a previous MERS outbreak ignited public criticism. One of the main concerns raised was the lack of decisive action and information on the whereabouts of infected individuals, and this led to further spread.

At the time, Seoul Mayor Park Won-Soon held a press conference and commented, “I think information should be disclosed.

When dealing with the recent COVID-19 outbreak, the Korean government revised its response plan towards infectious-diseases and the outcome was providing public-health officials with more authority to shut down facilities and gain access to information on infected patients and suspected cases.

Even though the applications of smart technology in collecting personal information and monitoring the mobility patterns of civilians are revolutionary, insiders are concerned that the rise of surveillance technology might threaten individual privacy and civil liberties.

In other words, uncertainty over the storage and use of the data collected recently, the National Health Service (NHS) of the UK has announced it will be utilizing its own app instead of Apple and Google’s coronavirus app. Data gathered from the NHS’s app will be sent to a central database maintained by the British government.