Britain’s tech sector isn’t looking any more favorably on a hard exit from the European Union. 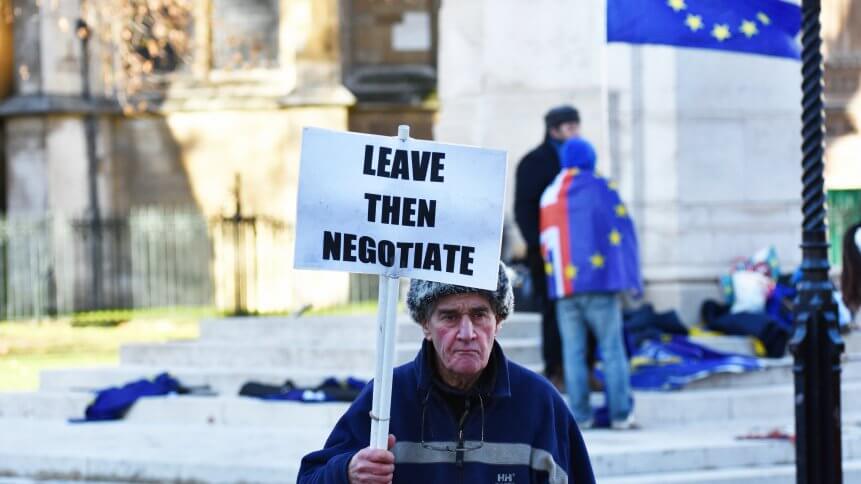 A pro Brexit protestor – for the UK ‘crashing out’ of the European Union without a deal. Source: Shutterstock

Given the publication of the UK government’s no-deal Brexit contingency planning report this week— codenamed ‘Operation Yellowhammer’, which warned of riots, food price rises, and reduced medical supplies— that the country’s tech industry isn’t filled with confidence about leaving the EU without a trade agreement should come without surprise. 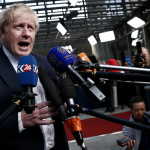 A survey of close to 200 small, medium and large businesses by techUK revealed an overwhelmingly negative outlook on the impact of a no-deal Brexit on their business.

Just 3 percent said leaving without an agreement would have a positive impact.

Concerns ranged, from a slowdown in business and the overall economy (73 percent); confusion around how current (EU) compliance laws and the free-flow of data would be affected (51 percent); impact on the ability to retain and recruit talent from the EU (45 percent), and the impact of additional regulatory barriers (47 percent).

“These are incredibly unpredictable times for UK tech companies and it’s fair to say that laying plans for a potential divorce from the EU with no deal has been appropriately front of mind,” Charles Maniace, VP of Regulatory Analysis & Design at Sovos, told TechHQ.

Maniace explained that the real issue lies in uncertainty, which is hampering preparation and reassurance. While a third of large businesses (those of 250 or more staff) had not yet made preparations, for small businesses, it was more than one half (52 percent).

“While Parliament has expressed a clear preference for a negotiated withdrawal and has compelled the Prime Minister to request a delay, the fact remains that EU rules, as written this week, point to a Hard Brexit on October 31.

“That fact, coupled with the reality that the Prime Minister is highly inclined towards an immediate withdrawal, means that nothing at this point is certain,” said Maniace. 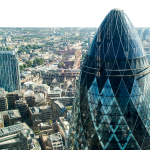 UK tech funding strong in the face of Brexit, for now

Last month, TechHQ explored how the imposition of data flow and storage restrictions could take place as the UK effectively becomes a “third country” in accordance with the EU’s GDPR.

That means, that while the UK’s 2018 Data Protection Act must remain intact, its data and information practices will need to be assessed by the EU before it can be granted “adequacy” status— which would ensure EU citizens’ data could be held by UK-based organizations, or “business as usual”.

Earlier in the year, meanwhile, a LinkedIn Workforce report revealed concerns among recruitment managers about a reduction in skilled grads arriving from the continent in the wake of the referendum, and the potential impact on UK tech as 20 percent of its inflow of workers, of which are skilled European migrants, could effectively be cut off.

Interestingly, however, UK tech firms received £5.5 billion (US$6.7 billion) in overseas funding this year, amounting to more than that of the whole of 2018. While this was thought to partially be a result of the US-China trade war rechannelling investment, ironically, it was also attributed significantly to a weaker pound as a result of that same Brexit uncertainty.

TechUK’s survey asked companies what steps they would like the government to take in regard to financial support, communications support, and support to navigate tariff and non-tariff barriers, ahead of a no-deal Brexit.

More than one-third (36 percent) requested tax relief and financial support to pay for professional services to help them prepare for the scenario. On communication support, 38 percent wanted updated technical notices for Brexit preparedness and a dedicated government helpline for business support.

Finally, on navigating tariff barriers, 53 percent wanted the government to commit to aligning with EU single market rules and standards for six months or more after a no-deal exit.

“While tech innovation is often born on home turf, no industry is fully insulated from the impact of a change of this magnitude and all companies must remain at the ready to adapt,” said Maniace.

“For example, tech companies registered for VAT in the UK under the Union Scheme selling electronic services to EU non-business customers must register for VAT somewhere within the Union.”