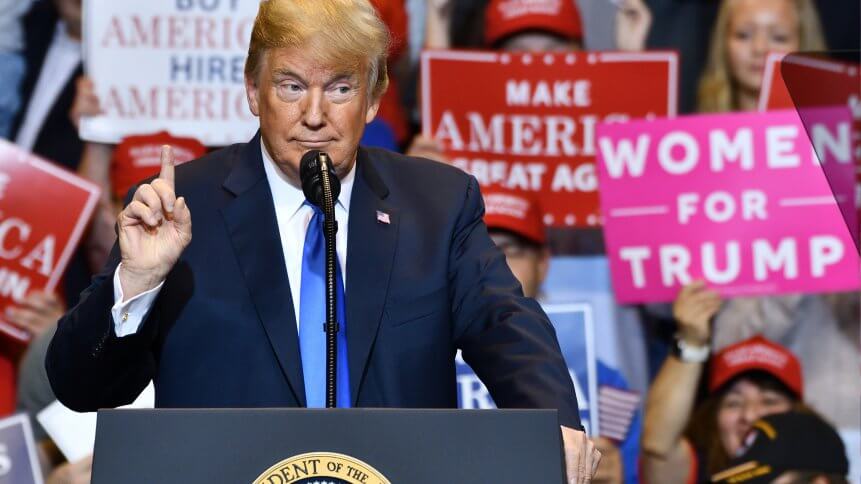 US President Trump is wrong and is placing himself on the wrong side of history on Bitcoin – but cryptocurrencies should be regulated, says the boss of one of the world’s largest independent financial advisory organizations.

I am not a fan of Bitcoin and other Cryptocurrencies, which are not money, and whose value is highly volatile and based on thin air. Unregulated Crypto Assets can facilitate unlawful behavior, including drug trade and other illegal activity….

Nigel Green, the founder, and CEO of deVere Group is speaking out after Donald Trump took to Twitter to say: “I am not a fan of Bitcoin and other cryptocurrencies, which are not money, and whose value is highly volatile and based on thin air.

Trump on the wrong side of Bitcoin history https://t.co/Plyk1JvCBb

“If Facebook and other companies want to become a bank, they must seek a new Banking Charter and become subject to all Banking Regulations, just like other Banks, both National and International,” said Trump.

The launch of Libra

The President’s tweets follow last month’s announcement by Facebook that it is to launch its own new digital currency to be called Libra. It is designed to be a low-volatility currency that will let its users buy things or send money to people with very low fees.

It will be backed by reserves managed by an independent organization, called the Libra Association, made up of several leading tech firms and non-profits that give the token real-world value.

Nigel Green affirms: “President Trump is wrong and is placing himself on the wrong side of history on Bitcoin and other cryptocurrencies.

“The blistering pace of the digitalization of economies and our lives underscores that there will be a growing demand for digital, global, borderless money.

“Indeed, it is now almost universally regarded as the future of money.”

Aside from tech firms like Facebook stepping into the arena, Green added that further precedents are being set as major financial institutions across the globe are establishing retail desks, and more and more retail and institutional investors are “piling” into the market.

“When everything from voting to music to books is already digital, dismissing digital currencies in a digital era is, frankly, bizarre and looks depressingly archaic,” said Green.

“Does the President seriously think that traditional, fiat currencies are the way forward?”

The regulation of cryptocurrencies

The DeVere chief did agree that Facebook’s new Libra cryptocurrency should be scrutinized. However, he suggested that as a “social media monolith”, the firm would be expecting scrutiny, and almost certainly prepared to handle, and even welcome it, “as it will make its cryptocurrency stronger.”

Green noted that the wider point— if there is a clear one to be found— is in regards to regulation. With cryptocurrencies going mainstream, all should adhere to the same standards as the rest of the financial system.

As the use of cryptocurrency grows, regulation will provide the protection users need, and reduce the risks of exploitation of digital payment methods by criminals. As such, there is less risk of potential “disruption of global financial stability,” said Green, while it could provide opportunities for higher economic growth in countries which introduce it.

“And it is surely on its way, judging by the activities of regulators around the world.”

The deVere Group CEO concludes: “Standing on the sidelines, or worse looking backwards, on the issue of cryptocurrencies – which are redefining and reshaping the financial system – is a baffling approach for the leader of the world’s largest economy to take.”

On Trump’s comments on social media, the CEO of cryptocurrency trading platform CoinBase, Brian Armstrong, said the acknowledgment was an “achievement unlocked” for Bitcoin, which the President has until now not publicly acknowledged.

Achievement unlocked! I dreamt about a sitting U.S. president needing to respond to growing cryptocurrency usage years ago. “First they ignore you, then they laugh at you, then they fight you, then you win”. We just made it to step 3 y’all. https://t.co/N3tzUKELaK