Massive amounts of data generated by autonomous vehicles could provide a wealth of new insight into our cites, if we can get hold of it. AV data will provide new insight into the world around us. Source: AFP

The autonomous vehicle market is flooded with venture capital as investors and developers jostle to become first-movers when the technology inevitably takes hold. And when it does, it promises to completely reimagine transportation for consumers and businesses alike.

While we may be nowhere nearer to knowing when driverless vehicles will see a full-scale deployment owed to certain technological and regulatory roadblocks, what we do know is that these vehicles will both rely on and generate galactic amounts of data.

The data provided by navigation technologies could provide a wealth of new information which could be gathered and analyzed for “public good” providing insight into the infrastructure, traffic flow, pedestrian movement, environment, and other elements of our developing ‘smart cities’. But that means hyper-competitive autonomous vehicle vendors must be open to sharing high-value data, to begin with.

Entitled Counter-Mapping the Spaces of Autonomous Driving, a paper from Dartmouth College argues that the “massive commercialization” of autonomous vehicles will lead to the production of “new models of space” through the integration of data collected through technologies such as lidar scanning, machine learning, and artificial intelligence (AI).

“Self-driving cars have the potential to transform our transportation network and society at large. This carries enormous consequences given that the data and technology are likely to fundamentally reshape the way our cities and communities operate,” says Luis F. Alvarez León, author of the paper.

“Right now, the geospatial data obtained by a self-driving car exists in technological and corporate black boxes. We don’t know who can see the data, appropriate it or profit from it. With insufficient government regulation of data from self-driving cars, this raises significant concerns regarding privacy, security and public safety.”

According to Alvarez, while there will be value in opening up these black boxes and making it accessible for greater society, getting there would require a combination of legislation, open-source design, and hacking.

On legislation, the author says we must push back on sole ownership of data by carmakers, pointing to the ‘Right to Repair’ act as an example. First introduced in 2001, this required car manufacturers to provide third-party repair shops with access to the same information as authorized dealers (and all individuals since) as cars became more computerized and manufacturers the gatekeepers of data.

“[…] as cars come to rely completely on a vast array of sensors for navigation, the possibilities for profit multiply through the marketization of collected data about user habits, preferences, identity, locations, routes, and surroundings, as well as subscription services such as navigation guidance, emergency assistance, and onboard entertainment systems,” reads the paper.

“Calls for the right to repair are symptomatic of broader contestations challenging restrictive notions of ownership and closed access that have come to define digital capitalism,” it adds, explaining that the act is an example of how regulations can be pushed as new technologies overtake industry, enabling data to become “democratized”. 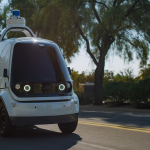 Work to embed a culture of openness in vehicle design is also crucial, which the author envisions as an open-source framework for vehicle design. Alvarez points to education company Udacity, which launched a ‘nanodegree’ aimed at providing people with skills for a “self-driving car career”, and is building its own version of the technology as an open-source project.

“[…] new open source initiatives will have to emerge that are geared towards demanding data transparency, proposing alternative technologies, and building frameworks for contestation,” reads the paper.

The paper’s last recommendation to ensure autonomous vehicle data is open is that of hacking. While more often than not presented in a negative sense, the author suggests hackers can help make car systems and data more transparent— and ensure car companies are held accountable.

“If we’re going to adopt self-driving cars, then we should really make absolutely sure that they are as secure as they can be,” says Alvarez. “This requires input from parties outside of the corporations who are building those very systems, such as government, advocacy groups and civil society at large.”

Autonomous vehicles promise to reimagine transport for individuals and businesses. Beyond just fundamentally changing the way we move, the data generated will offer a never-before-seen view of the nature of our towns and cities which could be used to benefit the infrastructure, the environment, and society at large.

For that to happen, though, all parties involved must be open to, or jostled towards, a culture of knowledge sharing, and legislation, open-source design and even hacking, could play a significant part in achieving that.