IBM introduces the world's first integrated quantum computing system for commercial use, the Q System One. 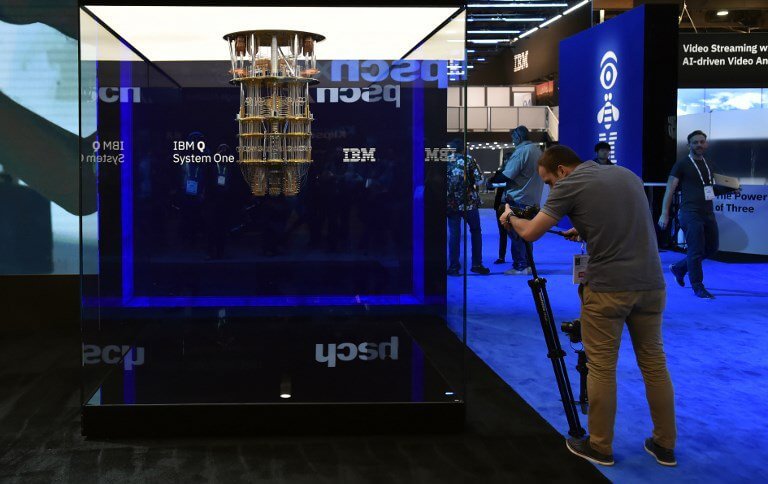 An attendee photographs IBM’s Q System One display at the IBM booth at CES 2019. Source: AFP

IBM has unveiled the Q System One, the world’s first integrated universal approximate quantum computing (QC) system designed for scientific and commercial use.

The company also announced plans to open its first Quantum Computation Center for commercial clients in Poughkeepsie, New York in 2019. These systems are designed to tackle problems that are too complex and exponential in nature for classical systems to handle.

Modeling financial data, and isolating key global risk factors to make better investments or finding optimal paths in logistics and fleet operations, are some of the possible uses for it in the future.

The Q System One has a modular and compact design optimized for stability, reliability and continuous commercial use. It enables universal approximate superconducting quantum computers to operate beyond the confines of a research lab.

The system is comprised of a number of custom components that work together to serve as the most advanced cloud-based quantum computing program available.

According to IBM, core benefits include:

This new center will house some of the world’s most advanced cloud-based quantum computing systems which will be accessible to members of the IBM Q Network.

“The IBM Q System One is a major step forward in the commercialization of quantum computing,” said Senior Vice President of Hybrid Cloud and director of IBM Research, Arvind Krishna.

“This new system is critical in expanding quantum computing beyond the walls of the research lab as we work to develop practical quantum applications for business and science,” he added. This new system marks the next evolution of IBM Q, the industry’s first effort to introduce the public to programmable universal quantum computing through the cloud-based IBM Q Experience, and the commercial IBM Q Network platform for business and science applications.

Nonetheless, some commentators think the announcement is more hyperbole than anything else. As the Q system has 20 qubits, it is still short of the 50 qubits that most researchers believe will be required real-life applications.

“A 20-qubit system is unlikely to be practically useful,” said the Director of the Lancaster Quantum Technology Centre, Robert Young, speaking to Wired.

The Q System One is almost like a throwback to the days of room-sized mainframe computers of the 1950s and 1960s. “It’s aimed at allowing a large corporation with a team of engineers to operate a quantum computer in house, rather than at consumers,” says Young.

So while the announcement may be a step forward for quantum computing, it may not quite be the giant leap IBM has made it out to be.