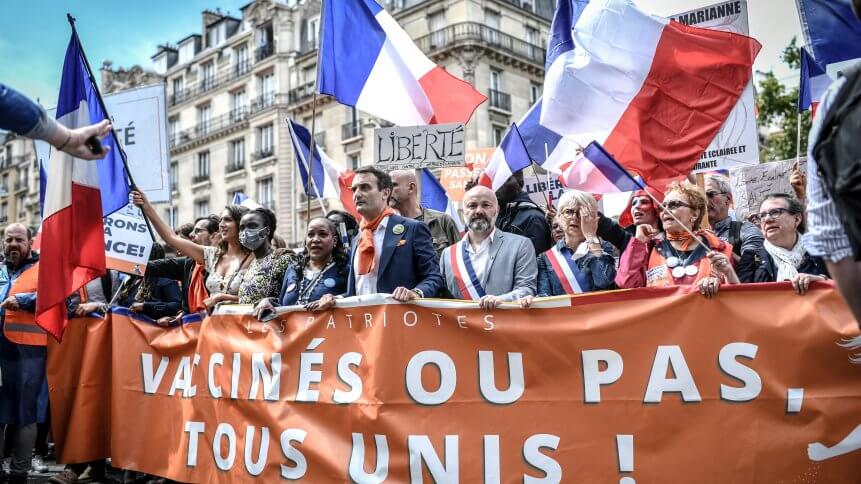 Why are many protesting against French Covid health pass? (Photo by STEPHANE DE SAKUTIN / AFP) 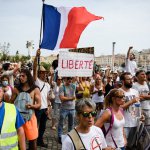 Last Thursday, the highest constitutional authority in France ruled in favor of controversial measures for a Covid-19 “health pass” that involves compulsory vaccination for health care workers. Starting from today, a QR code generated health pass is required to sit on the outdoor terrace of a cafe or eat at a restaurant. Those who lack both will be barred entry.

The government pressed ahead with the extension of an already-existing health pass despite four weekends of angry protests that saw almost a quarter of a million rally nationwide on Saturday. Protestors were calling for an end to what they see as draconian rules forcing them to get vaccinated against their will.

The law requires all workers in the health care sector to start getting vaccinated by September 15, or risk suspension. It also requires a health pass, generated in a QR code, to enter all restaurants, trains, planes and some other public venues.  It initially applies to all adults, but will apply to everyone 12 and older starting at the end of September. The law says a government decree will outline how to handle vaccination documents from other countries.

They marched down the streets of Paris, Lyon, Marseille, and elsewhere, shouting “This is a health dictatorship!” and “No vaccination, no health pass!”, in protests that included a wide range of social and political movements. Despite the pockets of angry opponents, the policy has so far proved successful at boosting vaccination rates and has been met with approval from the wider public. 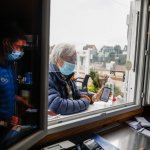 How will business owners and tourists adapt to the health pass?

In principle, the health pass works such that Europeans and Britons can upload their information into the French government’s mobile phone app, #TousAntiCovid. Unfortunately, in practice, that doesn’t always work, as claimed by some reports.

According to France24, “not only does the QR code not work at times, but many tourists don’t have a digital pass at all. Those vaccinated in the United States, for example, only have a handwritten card from the Centers for Disease Control and Prevention (CDC) to show as proof, so each of those must be visually verified. Those who are not vaccinated need to show a negative Covid test no more than 48 hours old. The timing of that, too, must be calculated by the guards.”

A survey by Animap.fr, a self-claimed “non-discriminatory platform” finds that over 6,000 restaurant and shop owners have registered on a site to declare that they will not ask visitors to show a health pass. Some even said they were not worried about the possible €1,500 initial fine for not asking customers to show health passes.

Some business owners’ main concern is that the health pass will deter people from going out and deliver yet another blow to their business. “It’s been a stop and go for two years, and now we’re doing quite well,” he said. “I’m really, really worried all that momentum we gained will slow down.”

On the government side, Macron, who has expressed exasperation with the protests, hopes that the plan will help ramp up vaccinations and quell the fourth wave of coronavirus in France in a strategy similar to that of EU neighbours such as Italy and Germany. Opponents argue the new rules encroach on civil liberties in a country where individual freedom is prized.

France is however not alone in embracing a health pass. Also commonly known as digital vaccine passports, it is being increasingly adopted by European countries, both in digital and in paper variants depending on country, and they limit entry to certain public places to those who have been vaccinated, recovered from Covid-19 or tested negative.