It has been a bumpy ride for Apple’s Project Titan, but sources suggest a passenger vehicle may be around by 2024 Six years ago, Apple started Project Titan and had ambitious plans to shake up the auto industry as it had the mobile business. As Apple’s COO Jeff Williams said in 2015, “The car is the ultimate mobile device, isn’t it?” However, two years after the initiation, Apple scrapped the idea of having its own electric vehicle, instead shifted its focus on creating the technology for an autonomous vehicle that doesn’t require a human driver.

Project Titan, the codename for Apple’s automotive project from five years ago, is making headlines again as Reuters reports that maybe the tech giant isn’t ready to call it quits with cars just yet. The wire service claims Apple is now targeting 2024 “to produce a passenger vehicle that could include its own breakthrough battery technology.”

Reuters also claims that technology is a quantum leap on the same level as the original iPhone, something that will “radically” reduce the cost of batteries and increase the vehicle’s range. The report also claims that Apple is indeed seeking to make a consumer-focused, personal vehicle—not a robo-taxi like Google’s Waymo, or something meant for a ride-sharing service.

It started in 2014 with the ambitious goal of redefining the auto industry the way the iPhone transformed the consumer gadget market. Project Titan poached top talent from the automotive and tech sectors, moved trusted Apple veterans inside, deployed sensor-covered minivans out for testing, developed relationships with suppliers, and even got attention for “weird noises” from a shell company thought to be developing such a vehicle. (A Fiat Multipla 600 was said to be a possible design inspiration for the car.) At one point, it was said to ship by 2019.

It wasn’t too long before things fell apart. As with many “mobility” startups, Project Titan felt like an idea in search of a business model. Among other factors, news reports at the time indicated that Apple’s leadership couldn’t decide if they wanted to take on Tesla (to say nothing of General Motors, Toyota, and the rest) with a passenger car, or develop an autonomous taxi service of some sort like Google.

One report even said the Project Titan team examined replacing the car’s wheels with spherical ones, “like a globe.” By 2017, Project Titan was scaled back dramatically, and more than 200 people were laid off another two years later. 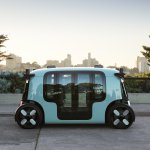 Amazon Zoox — the start of the robotaxi takeover?

Today, it’s easy to guess that alongside every industrial conglomerate, Apple too is chasing longer-lasting, cheaper battery cells, a technology that could be a game-changer in the years to come.

“As for the car’s battery, Apple plans to use a unique ‘monocell’ design that bulks up the individual cells in the battery and frees up space inside the battery pack by eliminating pouches and modules that hold battery materials”, one of the people told Reuters. Apple’s design means that more active material can be packed inside the battery, giving the car a potentially longer range.

Apple is also examining chemistry for the battery called LFP, or lithium iron phosphate, the person said, which is inherently less likely to overheat and is thus safer than other types of lithium-ion batteries. It’s the next level. “Like the first time, you saw the iPhone,” the person said of Apple’s battery technology.

Though it remains unclear who would assemble an Apple-branded car, sources have said they expect the company to rely on a manufacturing partner to build vehicles. And there is still a chance Apple will decide to reduce the scope of its efforts to an autonomous driving system that would be integrated with a car made by a traditional automaker, rather than the iPhone maker selling an Apple-branded car, one of the people added.

Recently, Apple is said to be shuffling its leadership that oversees its secretive self-driving car project, according to Bloomberg. The team’s engineers will now report to John Giannandrea, the company’s head of artificial intelligence, who also oversees voice-based digital assistant Siri.