The winds of change are blowing through your new hyperconverged network: StarWind

Management of modern IT systems means a good deal of juggling, and a certain amount of the wearing of several hats.

Most companies are using public cloud services to some extent, from simple offsite data replication through to running key applications in AWS, Azure, Google, Oracle Cloud, and so forth. There’s usually a decent wedge of legacy on-prem apps and services too, plus – if you’re lucky enough to work in a dynamic and expanding business – there will be some branch offices, remote installations or edge deployments, as well.

On top of that, you might be using some more specialist services, like a CDN, or a block storage specialist. But whatever the topology, every IT Manager knows in his or her heart of hearts: things aren’t going to be getting any easier or less complex to manage.

Virtualization is nothing new, of course: even if your company isn’t using an SD-WAN or racks of virtual machines, the services you use remotely indubitably do.

Hyperconvergence, or the abstraction of entire compute, network and storage systems, is the next logical step in virtualization. However, it’s been the plaything until now of very high-end enterprises with the budgets to run costly hardware and pay for recurring licenses; not something for mere mortals.

Starwind’s HCAs (hyperconverged appliances) are set to change all that. The Massachusetts-headquartered company’s devices can be dropped into any topology just about anywhere (even a rack in a ROBO or edge installation would be fine), and the platform brings the huge gains that hyperconvergence offers to the mainstream business. The devices are based on standard hardware, cost less than half a Tesla Model 3, and provide a fully-abstracted platform with a single (yet scalable) node. 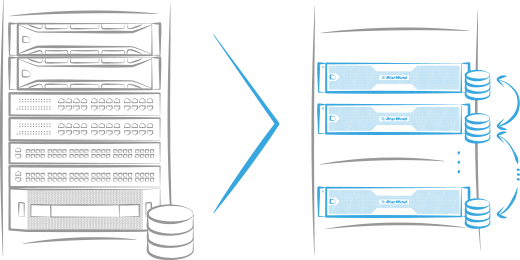 In practical terms, your organization could get the advantages that have, until Starwind’s offerings came along, given a profoundly unfair advantage to massive enterprises. Via a web interface, any company can control cloud compute and storage, in-house applications, and services, any storage or virtualized machines, anywhere in the network, and configure the whole as if it were a single entity.

Critical applications can have additional resources allocated to them on the fly (or via preset rules or set up by triggered events like demand surges), so – as a single, random example – spare capacity on Azure can be re-assigned to edge IoT data processing at key periods, in seconds.

To the layperson (or dyed-in-the-wool businessperson) that capability will probably sound hugely complex, and the technology that underpins the StarWind platform is indeed, ingenious. However, to implement a fully hyperconverged network is simple.

Apart from massive cost savings from network resource utilization improvements, companies can expect to see cloud and network bills falling, as, by careful allocations, every resource gets used to its fullest. There’s no cable-plugging or reconfiguration for IT to undertake that holds up new projects, and because of the distributed nature of a hyperconverged platform, uptimes and QoS metrics get a massive boost, too.

The StarWind team will, by default, configure your new devices for you, and migrate apps and services as part of the package. You can even get started with a pay-as-you-go model, whereby the device(s) are installed up front, and payments are regular: it’s an on-premise solution with cloud service-like entries in the ledger.

The StarWind HCAs are designed to sit alongside traditionally ‘separated’ IT, where storage and compute devices are distinct. The abstracted network unifies NAS and SAN, cloud storage, replication, and backup, into virtualized data stores for any purpose, re-allocate-able or divisible as required.

There’s automatic de-duping and compression, so you get higher amounts of storage from existing drives – wherever they’re situated. In the same way, apps, services, databases and the like can be dynamically allocated extra power, to improve responsiveness. There are also significant security pluses gained too, with complete oversight over the network in real-time.

The StarWind solutions aren’t an offering that requires a brand-new platform. It plays nicely with SMB, NFS and provides “a single pane of glass” over SCVMM and OpenStack resources: the solution complies to SMI-S standards. Extra storage and compute can be simply dropped into the mix and “it just works”.

The support shown at the beginning of any deployment of StarWind technologies (not just its hyperconvergent solutions – see the company’s other offerings) continues, with every HCA monitored by staff from StarWind and their systems, 24/7.

Rather than raising tickets for problems, many customers will find issues resolved on-the-fly by proactive support. In short, the company’s approach is as revolutionary as the technology – and all at a price that won’t have your CFO spinning in his office chair.

To learn more about StarWind, get in touch with a representative today.