Google opens up Hangouts Chat Messaging to users of its productivity tools, G-Suite. Chat, message, collaborate and video conference, all inside the G-Suite. Source: Shutterstock

Google has announced the full roll-out of its Hangouts Chat Messaging platform. The company first announced the platform last year, but now it is available to all users of its G-Suite service.

As of last week, project teams in different offices or spread out over the globe can collaborate in team chat rooms, contributing to threaded conversations and being able to search through previous chats and uploaded files, to manage a project more efficiently.

As well as the ability to search files or previous conversational snippets, conference rooms or meeting rooms can be booked through the platform. Applications are available for Android, iOS, Windows and Mac OS.

A virtual Hangout room can support to 8000 team members, and the platform runs happily in 28 different languages.

Being part of the G-Suite, Hangouts Chat Messaging is fully integrated with other applications, such as Docs, Drive, Sheets, and Hangouts Meet. Files can be uploaded from Drive, and brought into Google Sheets or Slides, for instance. Scott Johnston, director of product management at Google, said in a blog post that integration with Hangouts Meet makes it easier to set up online meetings. He went on:

Bots are available, for instance, to alert team members when a file hosted on Google Drive is shared or gets commented on.

The Meet bot uses Google Calendars to intelligently schedule meetings for users, depending on their availability – saving the need for virtual “meeting tennis.”

It is also possible for organizations to develop their own bots. Google’s Hangouts Chat developer platform and API can, as an example, take a user’s location, cross-reference via the Maps API, and display the resulting map of a location within the same message thread in Hangouts Chat, according to Google.

The artificial intelligence-powered (AI) backend can suggest files or content which a user might require for any meeting, based on their activity and information contained in saved files.

AI integration with Google Calendars is set to follow in the next few months. Suggested uses including letting algorithms suggest particular meeting rooms for teams, based on where team members happen to be on a chosen day, down to detail as granular as floors in specific buildings. According to a further blog post by Google, results will take into consideration previous room booking history, AV requirements, and the required capacity for a conference. 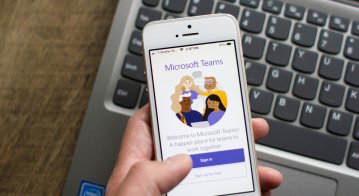 ‘As big as the internet’ – Satya’s lofty ambitions for Teams